For the last nine years or so, I have have been doing research on various types of plasma traps for confining positrons (the antiparticles of electrons). In other words, I work on antimatter containment fields.

Some of these traps are used for confining a single sign of charge (non-neutral plasma traps) and are the go-to way to trap and accumulate pure positron plasmas. Others can be used to confine positively and negatively charged particles at the same time, in the same volume — as is needed for nuclear fusion devices or to study some of the fundamental physics of “pair plasmas”.

An introduction to each of these is below . . . and if you scroll down even farther, there’s a description of my graduate research on arched, plasma-filled “flux tubes”. 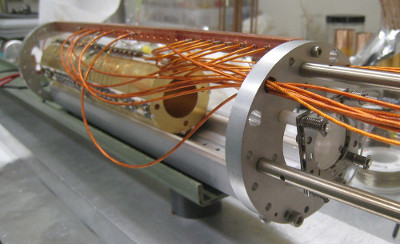 A typical positron trap is made by putting hollow cylindrical electrodes (shown here) in a uniform magnetic field in vacuum.

Despite the seemingly “otherworldly” quality of antimatter, positrons are very real and quite useful (albeit hard to come by), holding both the key to fundamental questions about our universe while also turning out to be a valuable diagnostic tool. In 1931, Paul Dirac came around to the idea that the relativistic wave equation he derived three years earlier predicted the existence of an “anti-electron”; Carl Anderson coined the term positron after he observed them experimentally the following year. Today, Positron Emission Tomography (PET) has become a widespread medical tool. (In that case, however, the positrons are merely a brief intermediary by which pairs of gamma rays are produced from the biological substance of interest.)

Positrons can be stored, manipulated, and directed in a diverse array of research applications found within surprisingly disparate areas of inquiry. They have exposed new phenomena in atomic physics, been used as the ingredients for the creation of anti-atoms, and proved to be valuable tools for a variety of material diagnostics. They also represent the limiting ingredient in the formation of an electron-positron pair plasma . . .

These plasmas — in which the positively and negatively charged particles have precisely equal mass (unlike the electrons and ions of “standard” plasmas) — have been an object of theoretical inquiry for decades but have not yet been confined in the laboratory. Doing so would allow the first experimental validation of numerous predictions of plasma theory and open up a new avenue of laboratory astrophysics.

In pursuit of this goal, there exist several interrelated challenges: availability of sufficient positrons, development of the devices in which the pair plasma will be trapped, and efficient transfer of the positrons into those devices. The APEX (A Positron Electron eXperiment) collaboration is working on a number of projects in parallel that address these challenges. We are building on recent developments in non-neutral plasma physics and in the quality and strength of positron sources that, when unified with magnetic “cages” that were specially designed for this purpose, will bring the goal of confined laboratory matter-antimatter pair plasmas within reach.

An older overview of the project (“Discoveries and advances en route to electron-positron pair plasmas”) can be found in the November 2017 issue of the MLZ News. An updated diagram of our overall plan is shown below.

Once the different projects we have been working on area all brought together, positrons from a world-class positron beam (NEPOMUC) will be accumulated into ever denser bunches in a series of non-neutral plasma traps, then injected along with electrons (not shown) into either of two very different pair plasma traps.

My graduate work involved studying the driving forces, evolution, and interactions of “loops” of plasma. A summary and some videos are below; more details can be found, of course, in my dissertation, which is on the Caltech THESIS web site (link | PDF).

The surface of the sun is covered in arched magnetic plasma structures. Some of those structures are unstable and will erupt, sending large quantities of magnetized plasma out into the solar system. If these outgoing solar “storms” encounter Earth, they not only produce dazzling auroras, but can also damage satellites and power grids. Understanding the physics of what causes eruptions can help us predict and respond to inclement solar weather. 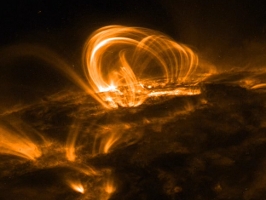 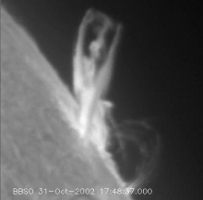 Back here on earth, fusion devices attempt to create plasmas that are hot and dense enough to replicate what happens naturally in the solar core — i.e., produce fusion energy — but without the benefit of a star’s gravity to help with the confinement. One approach to the problem is to corral the plasma in 3D magnetic configurations. (This takes advantage of the fact that magnetic fields have an effect on moving charged particles, and vice versa.) At the boundary between the hot, confined plasma and the cool wall of the surrounding vacuum chamber are important structures known as divertors.

Both solar coronal phenomena and divertors in magnetic fusion confinement devices, as well as astrophysical jets and spheromaks (a smaller self-organizing alternative magnetic fusion confinement configuration), involve plasmas whose magnetic field lines connect them to a boundary. The physics of these plasma systems can be difficult to capture in computer models; in some cases, direct measurements of phenomena are complicated or impossible. Fortunately, because the relevant magnetohydrodynamic (MHD) equations for describing magnetized fluids have no built-in dependence on the size of the system, we can construct laboratory experiments that experience the same physics, while providing reproducibility and diagnostic accessibility.

I used a pulsed-power, magnetized plasma gun to create a variety of different arched plasma structures. The sequence of events went like this:

High speed cameras captured visible light images; details of the spectrum were examined with a 13-channels spectrometer. “B dot” probes (made of small coils of wire) detected the magnetic field of the plasma as it moved past. A high voltage probe measured the voltage across the gun, while a Rogowski coil measured the current that flows through it.

Dual-gas plasmas: If I supplied different neutral gases to the different footpoints of the gun, I could then use optical filters to selectively look at the two gases’ different emission lines. This dramatically illustrated the behavior of the different sections of the plasma. Two standard ways to do this were:

The former were instrumental in studying the high speed flows that traveled from the footpoints into the apex of the loops, transporting material and magnetic flux through the system.

“Exotic” magnetic configurations: I computed the vacuum magnetic field lines for different configurations of the electromagnets, compared these with vacuum field measurements, and investigated how and to what extent these different initial fields affected the behavior and reproducibility of the resulting plasmas.

Magnetic flux tubes, in theory and practice: I compared the plasma magnetic field to a theoretical model — a current-carrying, force-free cylinder — and found sufficient qualitative agreement to confirm that our plasmas could indeed be described as “flux tubes.”

Experiment measurements, model “measurements,” and a cartoon of a force-freel flux tube passing by a three-axis magnetic probe.