Grain being emptied from a silo, people leaving a room, and cars entering a construction zone all have something in common: they tend to spontaneously clog.

How and why these clogs develop is important to a wide range of applications – from industrial processing to a building’s fire safety. Recent results from a team of researchers at the Universidad de Navarra in Spain shed new light on what factors do and don’t contribute to clogging and, hence, how to prevent it. In particular, they’ve shown that an obstacle at the right distance from the exit decreases the probability of a clog by 99 percent.

Materials known as “granular media” are large collections of particles that can behave like a solid at rest, or like a liquid in motion. Consider how sand might be poured, liquid-like, from a bucket; once it forms a stable pile, though, it will remain stolidly solid-like until further disturbed. This hybrid nature makes the physics of these materials a challenge to pin down.

According to a 2005 “progress” article in Nature Materials, “granular materials are ubiquitous in nature and are the second-most manipulated material in industry (the first is water).” However, “Their complex behaviours, ranging from mechanical properties [. . .] to their dynamics, [flow properties,] and instabilities, are still poorly understood.”

In order to clearly observe the behavior of a granular material down to the motion of single grains, a common approach is put one layer of particles in a narrow volume between two clear walls. High speed cameras can then be used to track the motion of individual particles. This was the method used by the scientists at Universidad de Navarra, led by Professor Iker Zuriguel.

The particles they used were tiny stainless steel balls only 1 mm in diameter. In the bottom of their test volume was a hole through which balls would flow out –- when they didn’t clog, that is.

Clogs in granular flows are very different from the sort that might form in, say, a bathtub drain. The drain clog must be due to foreign material; you never get water clogging a water pipe. With a granular material, on the other hand, the same stuff that was flowing through the outlet is the stuff that causes the blockage. Furthermore, when emptying water from a container, one doesn’t usually think to expedite the process by putting an obstacle a little ways in front of the exit hole. If the container is holding a granular material, though, that strategy is an effective one. Zuriguel and his collaborators wanted to know why that was the case. The answer they found is closely related to pedestrian crowd dynamics.

It had previously been seen, back in 2001, that clogs were caused by the spontaneous occurrence of arches of particles over the outlet. Once formed, an arched arrangement has enough structural strength to hold up the rest of the granular material above it, preventing any from reaching the outlet. 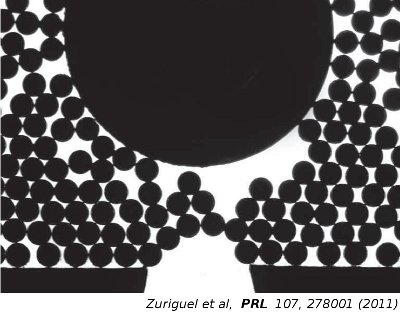 An example of an arch clogging the outlet.

Similar arched patterns have been observed to form in groups of people all heading for the same door. When you’re slowly filing out of a theater, it’s easy to feel like the process would go a lot faster if there weren’t all those seats between you and the exit. In an open room, though, six people can all step toward the door thinking they’re next in line, and by the time they sort out the resulting jam, their exit times are actually longer.

In the last decade, numerous theories have been but forth about what factors determine the likelihood of arch formation, including the ideas that the rate of flow or the density of particles above the outlet might be the determining factors. Zuriguel and his collaborators found that those explanations didn’t work.

Their experiments, detailed in the December issue of Physical Review Letters, involved varying the height of an obstacle above the outlet of the ball bearing container.

From the set-up outlined in both this paper and a previous one, it sounds like their whole system is automated. Hence their description, “Eleven different values of h [the distance from the outlet to the bottom of the obstacle] were explored, and for each one, around 3000 avalanches (and the corresponding arches) were registered.” Three thousand! Each “avalanche” is a pile of balls that flowed out of the volume between clogs.

They found when the obstacle was about as high as the outlet is wide, arches formed 1/100th as often as they did with no obstacle, yet flow rate and particle density (measured with high-speed imaging) remained almost the same.

Computer simulations revealed that this was a pressure effect; the obstacle prevented the particles higher up in the container from weighing down on those in the vicinity of the outlet. In short, trying to push those in front of you toward the exit doesn’t work any better for particles than it does for people.

3 thoughts on “Want to facilitate the flow of pedestrians or particles through an opening? Add an obstacle.”